This is our fifth year of our annual Fantasy Awards - The event where we and our community picks the best fantasy events of the year! We're sorry it took so much time this time around, but we'll promise next year will be quicker! This year we've reduced the categories a little from last year.

The voting was done by our community and anyone can join for free. So why don't you sign up now and join in on picking the best fantasy events from 2010? Do you produce fantasy music? Why don't you suggest yourself to our independet awards? 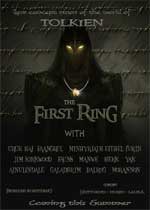 Produced by Fabien Simonetti, "The First Ring" includes independent artists such as Uruk-Hai, Galadhrim, Balrog, Jim Kirkwood and many more.

Other nominees: Into the Grey - Erdenstern, Two Worlds - Anabasis & Gargrim the Liar, World of Omnia - Omnia

"Legend of the Seeker" by Joseph DoLuca

Best Soundtrack for TV or Film

Lady Maven is one of our oldest registered members (she's not old, she's just been around since 2004) and she's still as active and helpful as always. Always lending a hand, helping out with this and that, and we have her thank for our Fantasy Awards as well! The Rivendell community wouldn't the same without her!

(It's still a little buggy sometimes)

© 2001-2013 Radio Rivendell. All rights reserved.Radio Rivendell is not affiliated by Tolkien Foundation, New Line Cinema or other copyright holders. Music, Comments, Images and Trademarks are property of their respective owners. Menu icons copyright by Glyphish and used under the Creative Commons Attribution license. Webdesign and CMS by Bobolo.se.

Becoming a member on Radio Rivendell is free, but it enables you to rate the music and take part in our forums.

In order to set a new password for your account you need go through with a brief confirmation process. Write your username or e-mail address in the field below.